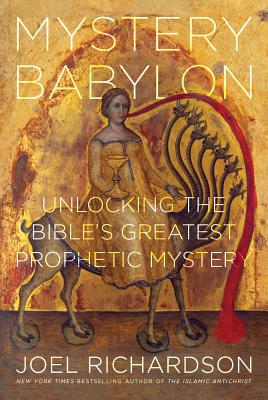 By Joel Richardson
Email or call for price.
Out of Print

New York Times bestselling author Joel Richardson carefully explores what is arguably the greatest prophetic mystery in all of the Bible.

Mystery Babylon is an in-depth look at the prophecy of Revelation 17 and 18. Richardson dissects the longest prophecy in the New Testament – the final chapters of the Bible – in order to make sense of these deeply elusive and profoundly controversial passages.

At once a queen, a prostitute, and a cold-blooded killer, this great harlot waves a golden cup filled with blood. Adorned in purple and scarlet and gold and precious stones, she seduces the kings of the earth with luxury. Most commonly known, perhaps, is that she rides a beast with seven heads and ten horns. Her title is Mystery, Babylon the Great, the mother of all harlots and of the abominations of the earth.

From the early days of Christianity, believers have struggled to understand the mystery of the great harlot. Scholars and students alike have arrived at many different conclusions.

In his characteristically easy-to-understand style, Richardson works through the history of Christian interpretation of Mystery Babylon, weighing the strengths and weaknesses of each view, making a powerful case for a solution to this prophecy that will rock the prophecy world.

Joel Richardson is the author of several books including the New York Times bestselling Islamic Antichrist: The Shocking Truth About the Real Nature of the Beast. He also wrote Mideast Beast and is the director of the WND Films documentary End Times Eyewitness. He is an internationally recognized expert on biblical prophecy, the Middle East, and Islam and is a human rights activist and a commentator for WND.