Why Spy?: The Art of Intelligence (Hardcover) 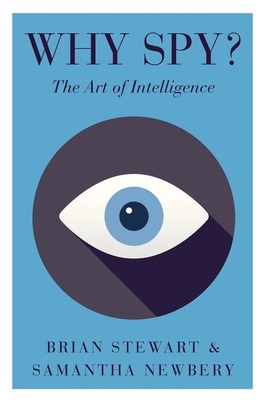 By Brian Stewart, Samantha Newbery
$29.95
Email or call for price.

Why Spy? is the result of Brian Stewart's seventy years of working in, and studying the uses and abuses of, intelligence in the real world. Few books currently available to those involved either as professionals or students in this area have been written by someone like the present author, who has practical experience both of field work and of the intelligence bureaucracy at home and abroad. It relates successes and failures via case studies, and draws conclusions that should be pondered by all those concerned with the limitations and usefulness of the intelligence product, as well as with how to avoid the tendency to abuse or ignore it when its conclusions do not fit with preconceived ideas. It reminds the reader of the multiplicity of methods and organisations and the wide range of talents making up the intelligence world. The co-author, scholar Samantha Newbery, examines such current issues as the growth of intelligence studies in universities, and the general emphasis throughout the volume is on the necessity of embracing a range of sources, including police, political, military and overt, to ensure that secret intelligence is placed in as wide a context as possible when decisions are made.

Brian Stewart, MC, CMG, went from Oxford into the Black Watch and studied Chinese during the pre-Communist turmoil. His career in the Malayan Civil Service and during later postings in Asia, including in Hanoi during the Vietnam War, was frequently concerned with intelligence in the field and his subsequent position as Secretary of the Joint Intelligence Committee in the Cabinet Office gave him a bird's eye view of the intelligence bureaucracy both in Britain and the United States. He continued to work in Asia, mostly in China, after leaving government service and to follow developments in the intelligence world with a critical eye. Samantha Newbery is Lecturer in Contemporary Intelligence Studies, University of Salford.
Sign Up for eNewsletter!
For Email Marketing you can trust.