Moment of Truth: The Nature of Catastrophes and How to Prepare for Them (Paperback) 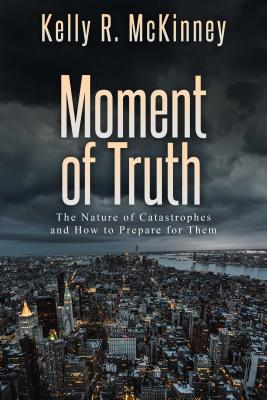 We are woefully unprepared for our next major disaster—but the lessons we’ve learned post-9/11 in NYC can show all of America the way to true resilience.

These aren’t actual headlines—but they could be. Even though they sound like next summer’s blockbuster movies, each of these worst-case scenarios is a real threat—a threat for which America is hugely underprepared. But it doesn’t have to be that way.

This is not a book about disasters. Instead, Moment of Truth will tell you what these genuine threats mean for society as a whole, as well as for your region or town—or you. All we have to do is open our eyes and look beyond the “brick wall of hope” that clouds our vision in collective denial.

In addition to advice for government, Moment of Truth contains practical steps that you can take now to keep you and your family safe in the face of the next catastrophe. Because it may come down to just you.

Kelly McKinney has had a leadership role in every major disaster in New York City for more than fifteen years, from the aftermath of the 9/11 attacks to the present day.

As Deputy Commissioner at the New York City Office of Emergency Management, he led the city’s response to Hurricane Sandy. He assembled a Task Force of hundreds, led by the FDNY and the National Guard, to knock on thousands of doors across the coastal areas devastated by the storm. He rebuilt the city’s disaster planning program, including the Coastal Storm Plan, about which the New York Post said “Planning makes perfect.”

As Chief Disaster Officer for the American Red Cross he rushed to the aid of people affected by train crashes and building collapses, most notably the March 2014 Con Edison gas explosion on 125th Street in Harlem.

He is the founding principal of Emergency Management Americas, a 501c3 nonprofit with a mission to advance the profession and practice of emergency management

Nationally known for his writing and speaking on the principles and practice of disaster management, his 5-minute video, The Essential Emergency Manager, has been viewed more than 70,000 times on YouTube.

He is a professional engineer with a BS in mechanical engineering from the University of Kansas and an MPA from Columbia University in the City of New York.

Currently, he is the Senior Director of Emergency Management and Enterprise Resilience at NYU Langone Health, a world-class academic medical center based in New York City.