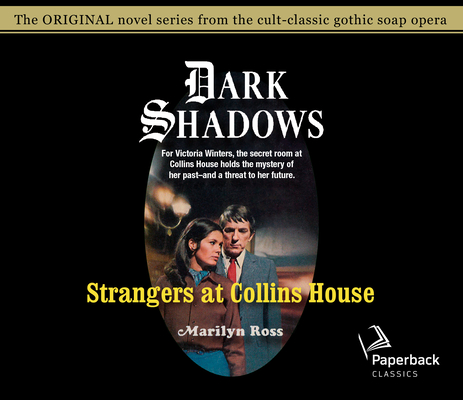 Strangers at Collins House (September 1967)
Victoria Winters at last feels she has a clue to her own identity when she meets elderly Henry Collins. He secretly gives her the jewels which once belonged to his lost love — a woman Victoria strangely resembles.

After receiving the gift, Victoria is suddenly terrified by attacks on her life which are masked as accidents. Surrounded by danger, Victoria wonders if she is to be the victim of ruthless thieves — or a hidden murderer desperate enough to keep her from learning about her past.

Marilyn Ross is the pseudonym for William Edward Daniel “W.E.D.” Ross (November 16, 1912 - November 1, 1995) was a Canadian actor, playwright and bestselling writer of more than 300 novels in a variety of genres. He was known for the speed of his writing and was by some estimates the most prolific Canadian author ever, though he did not take up fiction until middle age.

He wrote popular romances and gothic fiction as W. E. D. Ross and Dan Ross and under a variety of mostly female pseudonyms. As Marilyn Ross, he wrote popular gothic fiction including a series of novels about the tormented vampire, Barnabas Collins, based on the American TV series Dark Shadows (1966–71). His second wife, Marilyn, served as first reader of his works, and "Marilyn Ross" was one of his favorite pseudonyms.