What Would Mary Ann Do?: A Guide to Life (Paperback) 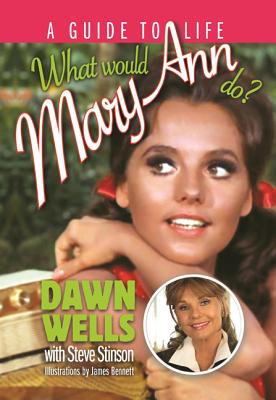 So, what would Mary Ann do? As the sweet, polite, and thoughtful Mary Ann Summers from Kansas in the hit series Gilligan's Island, Dawn Wells created an unforgettable and beloved character that still connects with people fifty years from the show's debut in 1964. As the "good girl" among the group of castaways on a tiny island, she was often positioned against the glamorous and exotic Ginger Grant, played by Tina Louise, prompting many to ask: Are you a Ginger or a Mary Ann? This book not only helps readers answer that question for themselves but also sends the inspirational and heartwarming message that yes, good girls do finish first. Part self-help, part memoir, and part humor--with a little classic TV nostalgia for good measure--What Would Mary Ann Do? contains twelve chapters on everything from how Mary Ann would respond to changes in today's culture to addressing issues confronting single women and mothers. Wells brings along her fellow characters from Gilligan's Island to illustrate certain principles, such as incorporating the miserly Thurston Howell III (Jim Backus) in a discussion on money. Anecdotal sidebars also describe fascinating facts and compelling memories from the show, as well as some trivia questions to challenge fans and followers. Illustrated with photographs from Wells's private collection, this book provides inspiring lessons from TV's favorite good girl.

A native of Reno, Nevada, Dawn Wells attended Stephens College in Missouri before going on to represent Nevada in the Miss America pageant in 1959. She found success in Hollywood immediately afterward, appearing in such shows as 77 Sunset Strip, Maverick, Bonanza, and Hawaiian Eye. She was later cast in the role of a lifetime as Mary Ann in Gilligan's Island, beating out 350 other actresses, including Raquel Welch. Since then, Wells has continued acting on the stage and screen, produced films, and been active in a number of charities. Steve Stinson is an artist and writer in Virginia, where he lives with his patient wife in the world's smallest five bedroom house. When he was young and limber, he was a juggler and wrote comic strips. Today, his grandchildren call him "Bebop." His four children's books, Grumpypants, Where Kent Went, Darien the Crustatarien, and My Favorite Nursery Rhymes, will be classics someday.