How (Not) to Speak of God (Paperback) 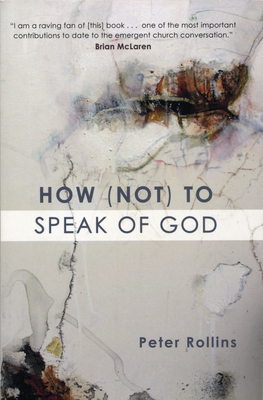 With sensitivity to the Christian tradition and a rich understanding of postmodern thought, Peter Rollins argues that the movement known as the “emerging church” offers a singular, unprecedented message of transformation that has the potential to revolutionize the theological and moral architecture of Western Christianity.
How (not) to Speak of God sets out to explore the theory and praxis of this contemporary expression of faith. Rollins offers a clear exploration of this embryonic movement and provides key resources for those involved in communities that are conversant with, and seeking to minister effectively to, the needs of a postmodern world.

“Here in pregnant bud is the rose, the emerging new configuration, of a Christianity that is neither Roman nor Protestant, neither Eastern nor monastic; but rather is the re-formation of all of them. Here, in pregnant bud, is third-millennium Christendom.” —Phyllis Tickle

“I am a raving fan of the book you are holding. I loved reading it. I have already begun widely recommending it. Reading it did good for my mind and for my soul. It helped me understand my own spiritual journey more clearly, and it gave me a sense of context for the work I’m involved in. In fact, I would say this is one of the two or three most rewarding books of theology I have read in ten years.” —Brian McLaren, from the Foreword

Peter Rollins has a B.A. in Scholastic philosophy, an M.A. in political theory and criticism, and a Ph.D. in postmodern theory. He is the founder of the Ikon community in Northern Ireland (a group which describes itself as iconic, apocalyptic, heretical, emerging and failing) and a working philosopher who has come to believe that the emerging church presents a singular, unprecedented opportunity to transform the theological and moral architecture of the Christian community.