The Social Lives of Animals (Hardcover) 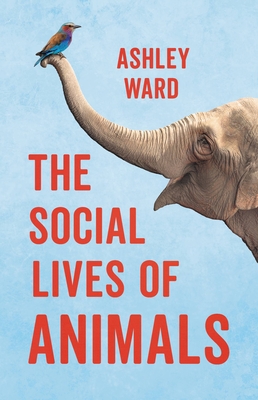 A rat will go out of its way to help a stranger in need. Lions have adopted the calves of their prey. Ants farm fungus in cooperatives. Why do we continue to believe that life in the animal kingdom is ruled by competition?

In The Social Lives of Animals, biologist Ashley Ward takes us on a wild tour across the globe as he searches for a more accurate picture of how animals build societies. Ward drops in on a termite mating ritual (while his guides snack on the subjects), visits freelance baboon goatherds, and swims with a mixed family of whales and dolphins. Along the way, Ward shows that the social impulses we’ve long thought separated humans from other animals might actually be our strongest connection to them.

Insightful, engaging, and often hilarious, The Social Lives of Animals demonstrates that you can learn more about animals by studying how they work together than by how they compete.

Ashley Ward is a professor and director of the Animal Behavior Lab at the University of Sydney, where he researches social behavior, learning, and communication across the animal kingdom. His work has been published in top journals including PNAS, Biological Reviews, and Current Biology. He lives in Sydney.

“The Social Lives of Animals offers a great antidote to the dog-eat-dog view of nature that we grew up with. Ashley Ward takes the reader on a personal journey of discovery to make clear that animals often depend on cooperation for survival.”
—Frans de Waal, author of Mama’s Last Hug

"Ashley Ward is the perfect guide for this global tour of animal sociability: knowledgeable, enthusiastic and, at times, very amusing. Whether it’s shoals of fish or herds of elephants, Ward provides privileged access to the inner workings of animal societies, drawing tantalizing parallels with our own. You’ll discover how herrings die of loneliness and why chimps cheat, and meet pessimistic bees and philanthropic vampire bats. Ward deftly illustrates how our shared sociable nature shapes language, intelligence, culture and emotions across the animal kingdom. This is a delectable read that leaves you with a sense of kinship for social creatures big and small, from giant sperm whales to tiny Antarctic krill. Highly recommended for animal fans and students of human nature alike."—Lucy Cooke, author of The Truth About Animals

“A thoughtful exploration of the complex minds that share the planet with us. Ashley Ward will give you a new appreciation for the bonds, emotions, and connections that we thought set us apart, but in reality, just bring us closer to the animal world.”
—Vanessa Woods, New York Times bestselling author of Bonobo Handshake

"On the face of it, Ashley Ward’s book is a lighthearted tour of animal social lives, a compendium of surprising revelations about a wide assortment of creatures, from krill to pinyon jays to sperm whales. Who knew, for instance, that keeping tabs on relationships is so vital to a sheep that it can recognize the faces of at least 50 members of its flock, or that a cockroach raised in isolation will never form normal bonds with others of its kind, and will remain forever at the margins of cockroach society? (Who knew, for that matter, that there even is such a thing as cockroach society?) A big part of the book’s appeal is just the strangeness and sophistication of this world of animal interactions, a nexus of cooperation and conflict that is all around us and yet mostly remains hidden from our view. Ward’s stories compel us to see social animals, not just as marvels, but as kindred spirits. He wants us to empathize with them as fellow navigators of the unpredictable landscape of relationships. And, with a light hand, he succeeds."—Alan de Queiroz, author of The Monkey's Voyage

"From swarming krill and flocking birds to cattle herds and tribal chimpanzees, Ashley Ward reveals animals to be much more social than often thought. Part deep dive into the latest science and part personal storytelling, Ward’s book shatters the old stereotype. This is not nature red in tooth and claw, but nature awash in cooperation and collaboration."

—Steve Brusatte, University of Edinburgh
Sign Up for eNewsletter!
For Email Marketing you can trust.