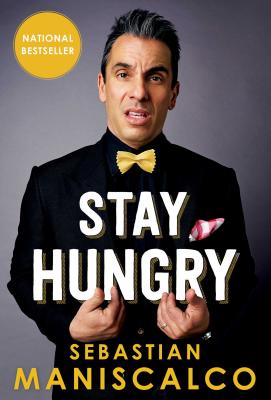 By Sebastian Maniscalco
Email or call for price.
Hard to Find

At twenty-four, Sebastian Maniscalco arrived in LA with a suitcase and saved up minimum wages. He knew no one and nothing about standup comedy, but he was determined to go for it anyway.

At forty-four, he’s on the Forbes’ list of highest earning comedians, sells out arenas, and has starred in four hit comedy specials including Why Would You Do That? on Showtime.

Stay Hungry tells the story of the twenty years in between. On the way from clueless rube to standup superstar, Seb was booed off stages; survived on tips and stolen food; got advice from mentors Andrew Dice Clay, Vince Vaughn, Tony Danza, and Jerry Seinfeld; fell in love; and stayed true to his Italian-immigrant roots. The one code that always kept him going: stay hungry, keep focused, never give up, and one day, you’ll make it.

Sebastian Maniscalco is a stand-up comedian, actor, and podcast host. In 2016 he was named Just for Laughs' Stand-Up Comedian of the Year and released his third Showtime special Why Would You Do That?, the network’s most successful comedy/variety special premiere. In 2017 his success globally landed him on Forbes’ “The World’s Highest Paid Comedians” list while his major motion picture portfolio expanded to include a voice-over for character Johnny the Groundhog in the animated feature Nut Job 2 and appearances in films including the Will Ferrell-starring New Line Feature comedy The House and a role in 2018’s Tag, starring alongside Ed Helms and Jeremy Renner. Maniscalco is currently the co-host of SiriusXM’s popular The Pete and Sebastian Show. He lives in Los Angeles with his wife Lana and daughter Serafina.

Even though Sebastian says that "comedy can't be learned, it is an experience you must endure," there's an awful lot to learn in this book. Not only for comics but for all performers. A really good read from beginning to end and some laughs along the way.
— Tony Danza

By one of the funniest men alive, this is a textbook on how to keep fighting when everything is telling you to go home. I love this book.  It is a love story - the love of comedy. It will inspire you.
— Danny Aiello

Having sat down to a few meals with Sebastian myself, I can attest to the fact that food is his first language and comedy is his second (with wine coming in a close third). This book does a great job of intertwining all three with the compelling and inspiring story of his rise to the top of the comedy world.
— J. J. Watt