Empire of the Summer Moon: Quanah Parker and the Rise and Fall of the Comanches, the Most Powerful Indian Tribe in American History (Compact Disc) 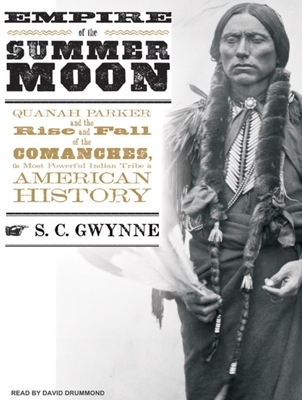 By S. C. Gwynne, David Drummond (Read by)
Email or call for price.
Out of Print

Few people realize that the Comanche Indians were the greatest warring tribe in American history. Their forty-year battle with settlers held up the development of the new nation. Empire of the Summer Moon tells of the rise and fall of this fierce, powerful, and proud tribe, and begins in 1836 with the kidnapping of a lovely nine-year-old girl with cornflower blue eyes named Cynthia Ann Parker. She grew to love her captors and eventually became famous as the "White Squaw." She married a powerful Comanche chief, and their son, Quanah, became a warrior who was never defeated and whose bravery and military brilliance in the Texas panhandle made him a legend as one of the greatest of the Plains Indian chiefs. In this vivid piece of writing, S. C. Gwynne describes in sometimes brutal detail the savagery of both whites and Comanches and, despite the distance of time, demonstrates how truly shocking these events were, juxtaposed against the haunting story of an unforgettable figure of a woman caught between two worlds.

S. C. Gwynne is an award-winning journalist whose work has appeared extensively in "Time" magazine--for which he served as bureau chief, national correspondent, and senior editor from 1988 to 2000--and in "Texas Monthly," where he was executive editor.

David Drummond has made his living as an actor for over twenty-five years, and he received an "AudioFile" Earphones Award for his first audiobook, "Love 'Em or Lose 'Em."