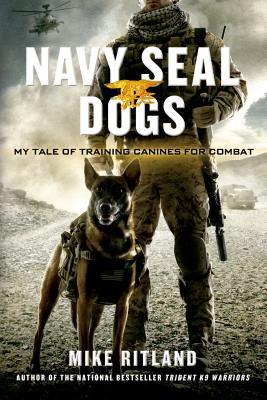 Before there was Max, there was Mike. A true story much like the touching movie, Navy SEAL Dogs explores the incomparable relationship between trainer and military dog.
Trident K9 Warriors gave readers an inside look at the SEAL teams' elite K9 warriors-who they are, how they are trained, and the extreme missions they undertake to save lives. From detecting explosives to eliminating the bad guys, these powerful dogs are also some of the smartest and highest skilled working animals on the planet. Mike Ritland's job is to train them.

This special edition re-telling presents the dramatic tale of how Ritland discovered his passion and grew up to become the trainer of the nation's most elite military working dogs. Ritland was a smaller-than-average kid who was often picked-on at school-which led him to spend more time with dogs at a young age. After graduating BUD/S training-the toughest military training in the world-to become a SEAL, he was on combat deployment in Iraq when he saw a military working dog in action and instantly knew he'd found his true calling.

Ritland started his own company to train and supply working and protection dogs for the U.S. Government, Department of Defense, and other clients. He also started the Warrior Dog Foundation to help retired Special Operations dogs live long and happy lives after their service.

This is the true story of how Mike Ritland grew from a skinny, bullied child, to a member of our nation's most elite SEAL Teams, to the trainer of the world's most highly skilled K9 warriors.

MIKE RITLAND joined the Navy in 1996 and graduated with BUD/S class 215. After years as a member of SEAL Team 3, he became a BUD/S instructor and then started his own company to train dogs for the SEAL teams. Today he continues to supply working and protection dogs to a host of clients, including the U.S. government and Department of Defense. He also started the Warrior Dog Foundation to help retired Special Operations dogs live long and happy lives after their service. Ritland is also the author of a book on dog training, Team Dog: How to Train Your Dog the Navy SEAL Way.

GARY BROZEK has collaborated on more than twenty books, five of which have gone on to become New York Times bestsellers, including Trident K9 Warriors. He lives in Evergreen, CO.

Thea Feldman is a prolific author of leveled readers and picture books for children, including Suryia and Roscoe and Suryia Swims!, which she co-authored with Dr. Bhagavan Antle. She has also worked at the Wildlife Conservation Society where she researched and wrote about the animals in the Society's five urban wildlife parks in New York City. She is a former editorial director at Scholastic.

“Navy SEAL Dogs gives a unique insider account of the training and deployment of these special animals and their handlers. Ritland does a superb job of detailing these dogs in combat, as well as the bond between operator and K-9. Readers are sure to be surprised by the different levels of service and skill that go into making an elite team of two legged and four legged SEALs.” —Howard Wasdin, former Navy SEAL and New York Times bestselling author of I Am a SEAL Team Six Warrior

“After a stellar career in the Teams, Mike Ritland has gone on to train working K9's for some of the most elite units in the U.S. Special Operations community. These dogs are integrated into Special Operations at all levels of mission planning. They HALO parachute from high altitude, chase enemy squirters, and detect explosive booby traps, to name just a few tasks. If you want to learn about these amazing animals, the sacrifices they've made, and their effectiveness in combat, then read Navy SEAL Dogs.” —Brandon Webb, former Navy SEAL, New York Times bestselling author of The Red Circle, and Editor-in-Chief SOFREP.com