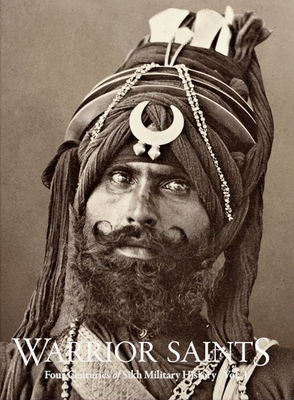 By Parmjit Singh, Amandeep Singh Madra
Email or call for price.
Out of Print

This first of two volumes explores the martyrdoms and conflicts that gave rise to a unique warrior culture steeped in the spiritual teachings of the 16th-century mystic poet, Guru Nanak. He was the first of ten Sikh spiritual masters hailing from Punjab, a region that today straddles North India and Pakistan. On his odysseys across Asia, he spoke out fearlessly against the oppression and hypocrisy that he witnessed. Imbibing his concept of righteous opposition to tyranny, his Sikh followers would go on to change the course of world history. When the Mughal Empire began persecuting Sikhs in the 1600s, this community of peaceful devotees took up arms to avert extinction. Warrior Saints (Vol. 1) tells the compelling story of how they fought back to establish a powerful empire stretching from the borders of Tibet to Afghanistan across Punjab's plains. The Sikh army became one of Asia's most powerful but their growing territorial ambition brought them into conflict with a rival foreign power, the British East India Company. The story of the Sikhs under the British Raj and in modern India is told in Volume 2.

AMANDEEP SINGH MADRA and PARMJIT SINGH are independent historians who have co-authored several highly acclaimed books on Sikh history. They have curated several major exhibitions on the subject and have worked as special consultants to the BBC, The Discovery Channel, Warner Brothers, Victoria & Albert Museum, British Museum, British Library and Wallace Collection.