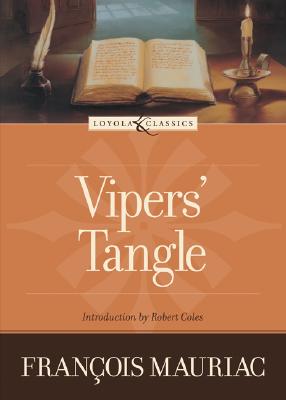 By Francois Mauriac, Robert Coles (Introduction by)
Email or call for price.
Hard to Find

“Mauriac’s best novel.”—Catholic World
“A lucid and penetrating study . . . Mauriac proves himself as good a storyteller as he is a psychologist.”—The New York Times
“A most admirable and exciting novel.”—New Statesman The masterpiece of one of the twentieth century’s greatest Catholic writers, Vipers’ Tangle tells the story of Monsieur Louis, an embittered aging lawyer who has spread his misery to his entire estranged family. Louis writes a journal to explain to them—and to himself—why his soul has been deformed, why his heart seems like a foul nest of twisted serpents. Mauriac’s novel masterfully explores the corruption caused by pride, avarice, and hatred, and its opposite—the divine grace that remains available to each of us until the very moment of our deaths. It is the unforgettable tale of the battle for one man’s soul.

Francois Mauriac (1885-1970) was a French Catholic author of novels, plays, essays, and political commentary who was awarded the Nobel Prize for Literature in 1952. His other novels include "Therese Desquey"roux and "The Woman of the Pharisees."