The Swimmers: A novel (Hardcover) 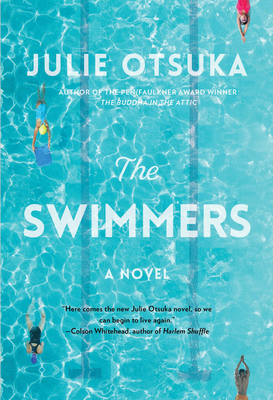 “Emotional and moving, The Swimmers shows the world through a wide-angle lens, slowly narrowing focus until the image disappears completely. A beautiful, poetic novel of a mother and a daughter, of culture, loss, guilt, and grief.”
— Betsy Von Kerens, The Bookworm of Omaha, Omaha, NE

NATIONAL BESTSELLER • CARNEGIE MEDAL FOR EXCELLENCE WINNER • From the award-winning author of The Buddha in the Attic and When the Emperor Was Divine comes a novel that "starts as a catalogue of spoken and unspoken rules for swimmers at an aquatic center but unfolds into a powerful story of a mother’s dementia and her daughter’s love" (The Washington Post).

The swimmers are unknown to one another except through their private routines (slow lane, medium lane, fast lane) and the solace each takes in their morning or afternoon laps. But when a crack appears at the bottom of the pool, they are cast out into an unforgiving world without comfort or relief.

One of these swimmers is Alice, who is slowly losing her memory. For Alice, the pool was a final stand against the darkness of her encroaching dementia. Without the fellowship of other swimmers and the routine of her daily laps she is plunged into dislocation and chaos, swept into memories of her childhood and the Japanese American incarceration camp in which she spent the war. Alice's estranged daughter, reentering her mother's life too late, witnesses her stark and devastating decline.

JULIE OTSUKA was born and raised in California. She is a recipient of a Guggenheim Fellowship, and her first novel, When the Emperor Was Divine won the 2003 Asian American Literary Award and the 2003 American Library Association's Alex Award. Her second novel, The Buddha in the Attic, was a finalist for the National Book Award in 2011 and won the 2012 PEN/Faulkner Award for Fiction and the 2011 Langum Prize in American Historical Fiction. The Buddha in the Attic was an international best seller and the winner of the prestigious Prix Femina Étranger in 2012, and the Albatros Literaturpreis in 2013. She lives in New York City.

CARNEGIE MEDAL FOR EXCELLENCE WINNER • A Best Book of the Year: VOGUE and KIRKUS

“Otsuka’s prose is powerfully subdued: She builds lists and litanies that appear unassuming, even quotidian, until the paragraph comes to an end, and you find yourself stunned by what she has managed, your throat tight with the beautiful detail . . . This is a novel of not just accumulation, but repetition, scenes looping in the way that the mind does, or the way swimmers swim laps. Compounded, these accretions build to an incredible feeling of loss, and too-late-ness . . . In a time of monotony and chaos, when death is as concrete as it is unimaginable, and when cracks can and do appear in the pool for no discernible reason, The Swimmers is an exquisite companion.” –Rachel Khong, The New York Times Book Review

"Once per decade we are graced with a new book by Otsuka, the award-winning author of 2012’s The Buddha in the Attic and 2003’s When The Emperor Was Divine. This year’s novel starts as a catalogue of spoken and unspoken rules for swimmers at an aquatic center but unfolds into a powerful story of a mother’s dementia and her daughter’s love. If Otsuka doesn’t write another novel for several years, it will be okay. This is one to be savored and reread." –Becky Meloan, The Washington Post

“The Swimmers is a slim brilliant novel about the value and beauty of mundane routines that shape our days and identities; or, maybe it's a novel about the cracks that, inevitably, will one day appear to undermine our own bodies and minds; and — who knows? — it could also be read as a grand parable about the crack in the world wrought by this pandemic . . . Otsuka's signature spare style as a writer unexpectedly suits her capacious vision . . . The Swimmers has the verve and playfulness of spoken word poetry.” –Maureen Corrigan, Fresh Air/NPR

“Otsuka beautifully renders the particularities of a life fully using every word, including the pronouns. She has a way of presenting seemingly objective details, but the emotions seep through the minutiae so that we know and feel much about Alice and those who care for her. With virtuosity, Otsuka hands us each crystallized inch of this tale that reflects a life — the pages memorialize what can't be forgotten . . . The Swimmers is [an] artfully refined story, even when it delves into the most painful parts of life.” –Abby Manzella, Minneapolis Star-Tribune

“[The Swimmers] is a masterclass in the use of non-traditional points-of-view. This slim, gorgeous book is divided into five chapters . . . and provides the reader with fresh insight into both the story being told and the craft of writing it.” —Laura Spence-Ash, Ploughshares

“There are books that seem as if they were written just for me, and Julie Otsuka’s The Swimmers is one of them . . . In Otsuka’s signature style, The Swimmers is a grand pointillist narrative driven by the unrelenting accretion of details like dots of color filling up the canvas . . . Otsuka [is] taking the gloves off in a way she hasn’t since the ending of When the Emperor Was Divine.” –Alice Stephens, Washington Independent Review of Books

“A quick and tender story of a group of swimmers who cope with the disruption of their routines in various ways . . . Otsuka cleverly uses various points of view: the swimmers’ first-person-plural narration effectively draws the reader into their world, while the second person keenly conveys the experiences of Alice’s daughter, who tries to recoup lost time with her mother after Alice loses hold of her memories and moves into a memory care facility. It’s a brilliant and disarming dive into the characters’ inner worlds.” –Publishers Weekly [starred review]

“Distinguished best-selling novelist Otsuka’s (Buddha in the Attic) latest is an introspective work that examines life’s journeys from a multitude of perspectives . . . Otsuka’s spare, dreamlike writing offers readers a deeply touching exploration of the impact on Alice’s Japanese American family (particularly her daughter) of caring for a loved one with dementia. Otsuka is noteworthy for her skilled storytelling and her ability to immerse readers in her characters’ emotional journeys. Essential reading for those already familiar with Otsuka’s work; those who haven’t read her are likely to be duly impressed." –Shirley Quan, Library Journal [starred review]

“Julie Otsuka’s first novel in 10 years is a quiet and startling masterpiece about memory, aging and the indelible experiences that define a life . . . The Swimmers seems to continually reinvent itself as each section reframes everything that came before it. Reading something so inventive and playful is a bit like being inside an architectural blueprint as it’s being drawn, or watching an acorn grow into a massive oak in only a few minutes . . . With nuance, grace and deep tenderness, Otsuka ponders the questions that define our lives: Who are we without our memories? What does it mean to truly see someone else, to see ourselves? What is knowable about the world, and what do we do with the mysteries no one can solve? Funny, moving and composed of sentences that read like small poems, The Swimmers is a remarkable novel from a writer with an unparalleled talent for capturing the stuff of the world, whether mundane, harrowing or bizarre.” –Laura Sackton, BookPage [starred review]

“Award-winning, best-selling Otsuka is averaging one book per decade, making each exquisite title exponentially more precious. Here she creates a stupendous collage of small moments that results in an extraordinary examination of the fragility of quotidian human relationships . . . Once more, Otsuka creates an elegiac, devastating masterpiece.” –Booklist [starred review]

“Having concentrated on one family in her first novel, then eschewed individual protagonists for a collective ‘we’ in her second, Otsuka now blends the two approaches, shifting from an almost impersonal, wide-lens view of society to an increasingly narrow focus on a specific mother-daughter relationship . . . The combination of social satire with an intimate portrait of loss and grief is stylistically ambitious and deeply moving.” –Kirkus Reviews [starred review]
Sign Up for eNewsletter!
For Email Marketing you can trust.