The Buffalo Creek Disaster: How the survivors of one of the worst disasters in coal-mining history brought suit against the coal (Mass Market Paperback) 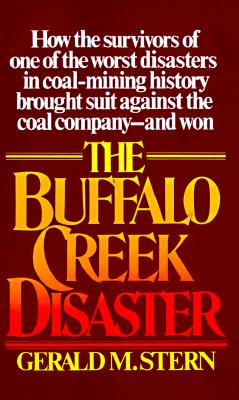 One Saturday morning in February 1972, an impoundment dam owned by the Pittston Coal Company burst, sending a 130 million gallon, 25 foot tidal wave of water, sludge, and debris crashing into southern West Virginia's Buffalo Creek hollow. It was one of the deadliest floods in U.S. history. 125 people were killed instantly, more than 1,000 were injured, and over 4,000 were suddenly homeless. Instead of accepting the small settlements offered by the coal company's insurance offices, a few hundred of the survivors banded together to sue. This is the story of their triumph over incredible odds and corporate irresponsibility, as told by Gerald M. Stern, who as a young lawyer and took on the case and won.

"A straightforward, suspenseful, and completely absorbing tale that will leave you cheering at the end."—San Francisco Chronicle“Jerry Stern's classic work provides readers with tremendous insight into the causes of the disaster. . . . It is powerful, troubling, and uplifting.” —From the foreword by President Bill Clinton“A shocking, timely book.” —The New York Times Book Review“A fascinating tale of how investigative lawyers work, intermingled with sympathetic portraits of the survivors of the disaster.”—Chicago Tribune“Fascinating reading. . . . An inside look at a history-making case.”—The Boston Globe