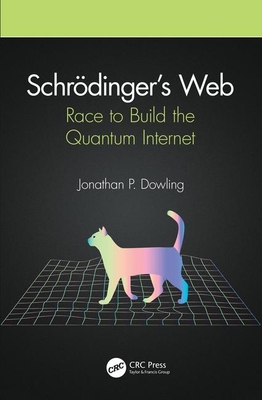 By Jonathan P. Dowling
Email or call for price.

As the race to build the world's first quantum computer is coming to an end, the race to build the quantum internet has just started. This book leverages the author's unique insights into both the Chinese and American quantum programs. It begins with the physics and history of the quantum internet and ends with the latest results in quantum computing and quantum networks.

Written by a renowned quantum physicist, this book is for everyone who is interested in the rapidly advancing field of Quantum Technology -- The Second Quantum Revolution. The 2016 launch of the Chinese quantum satellite Mozi was a quantum Sputnik moment. The United States went from thinking it was ten years ahead of the Chinese to the realization that it was ten years behind them. This quantum gap led to the U.S. National Quantum Initiative, launched in 2018. Since then, the race to build the quantum internet has taken off at breakneck speed.

Jonathan Dowling earned a Ph.D. in Mathematical Physics from the University of Colorado. He has worked at the United States Army Aviation and Missile Command, the NASA Jet Propulsion Laboratory, and then at the Louisiana State University. Dr. Dowling is one of the founders of the U.S. Government program in quantum computing and quantum cryptography.
Sign Up for eNewsletter!
For Email Marketing you can trust.